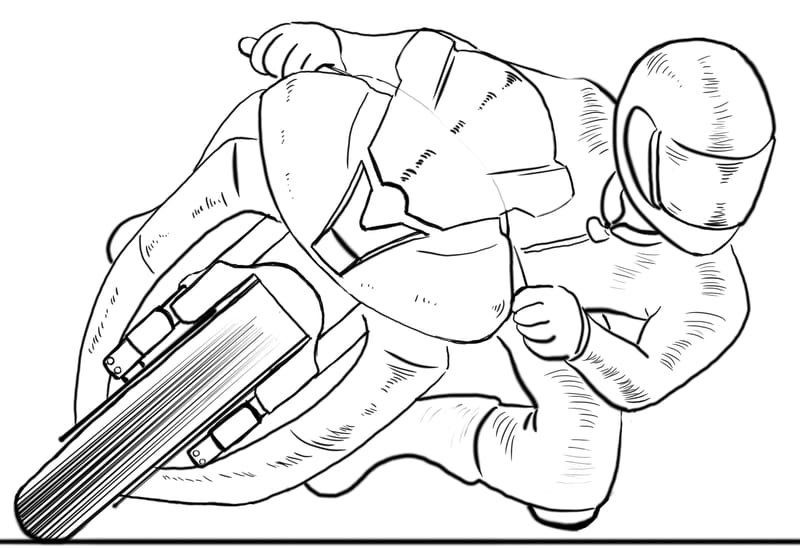 The actual technique of trail braking is fairly simple to accomplish but, it is a complicated series of events and interactions to describe and understand in detail.  To try to make this easy to understand, instead of pages of generalizations, I will use a detailed step by step method.

Before attempting any of the techniques discussed here it is essential that all of your racing equipment is in proper working order and is designed for high performance riding and that the track conditions will support this level of riding.

To refresh a couple of points in general about braking, we will assume that, up to this point, all of your braking has been done with the bike in a straight and upright position.  When the bike is traveling straight, you will have 100% of the traction available for braking.  On the other hand, after the turning point you will be leaning the bike over as you enter the turn.  The faster you enter the turn, the more the traction is used up by the cornering forces and leaves less traction available for braking.  You must keep this in mind as you progress with your braking into the turn.

Here is the main point about "Trail Braking" and braking in general.  If you are on the brakes for any reason or at any place on the track you will be slowing down.  Once you have reached the desired cornering speed “Get Off The Brakes”.  If you are down to your desired speed when you get to your turning point there is absolutely no reason or benefit to attempt trail braking.

For trail braking to be effective the rider must actually be at least "a little too fast" at the turning point.  The rider will now be required to use some of the entrance of the turn to finish scrubbing off the extra speed before he runs off the track or gets to the apex of the turn.

(Figure 1) Once you have achieved braking all the way to the turning point (RED LINE), using full braking force and have your entry speed right then, it is time to go a step further.  It is often asked, "Why should a racer need to carry the brakes into the turn?"  The concept is, if you are not, on the gas or on the brakes then you are coasting (GREEN CURVE).  Coasting wastes time.  A rider releasing the brakes at the turning point will be in a coasting condition in the entrance of the turn, until he starts to reapply the throttle.

Figure 1 The trick is to convert the coasting distance into either throttle time or braking time.  If a rider can use the entrance of the turn to finish braking, then he can delay the initial application of the brakes.  This delay of braking allows the rider to stay on the throttle longer, which is our primary goal.  This delay of the braking will result in a higher speed at the turning point.  If the delay is substantial enough, the rider will actually arrive at the turning point going "Too Fast" for the turn.

(Figure 2)  This shows an example we are using a Basic Wide, Tight, Wide (WTW) line through a simple 90 degree turn.  In most simple turns, the Basic Entrance line and Basic Exit line are actually mirror images of each other, with the Apex (Red Arrow) being the midpoint between the two. 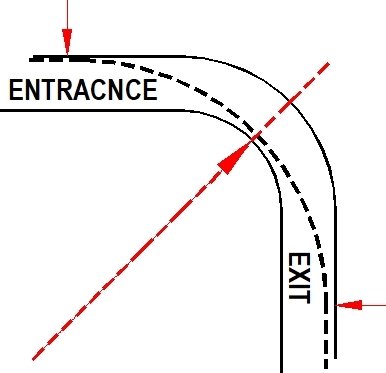 The Exit of the Turn

Some of this maybe just common knowledge but, let’s recap the dynamics.

(Figure 3) In this example, we are looking at a turn with a 60 MPH mid-turn limit.  Most racers, will likely, agree that it would not be very competitive for a racer to go past the Apex and then just maintain the same speed through the entire exit of the turn and then suddenly wick the throttle to fully open, all at once, after the exit point. (as shown here)  This technique may be good and/or safer for the average street rider or even the average Track day rider but, for racing, it leaves a lot to be desired. 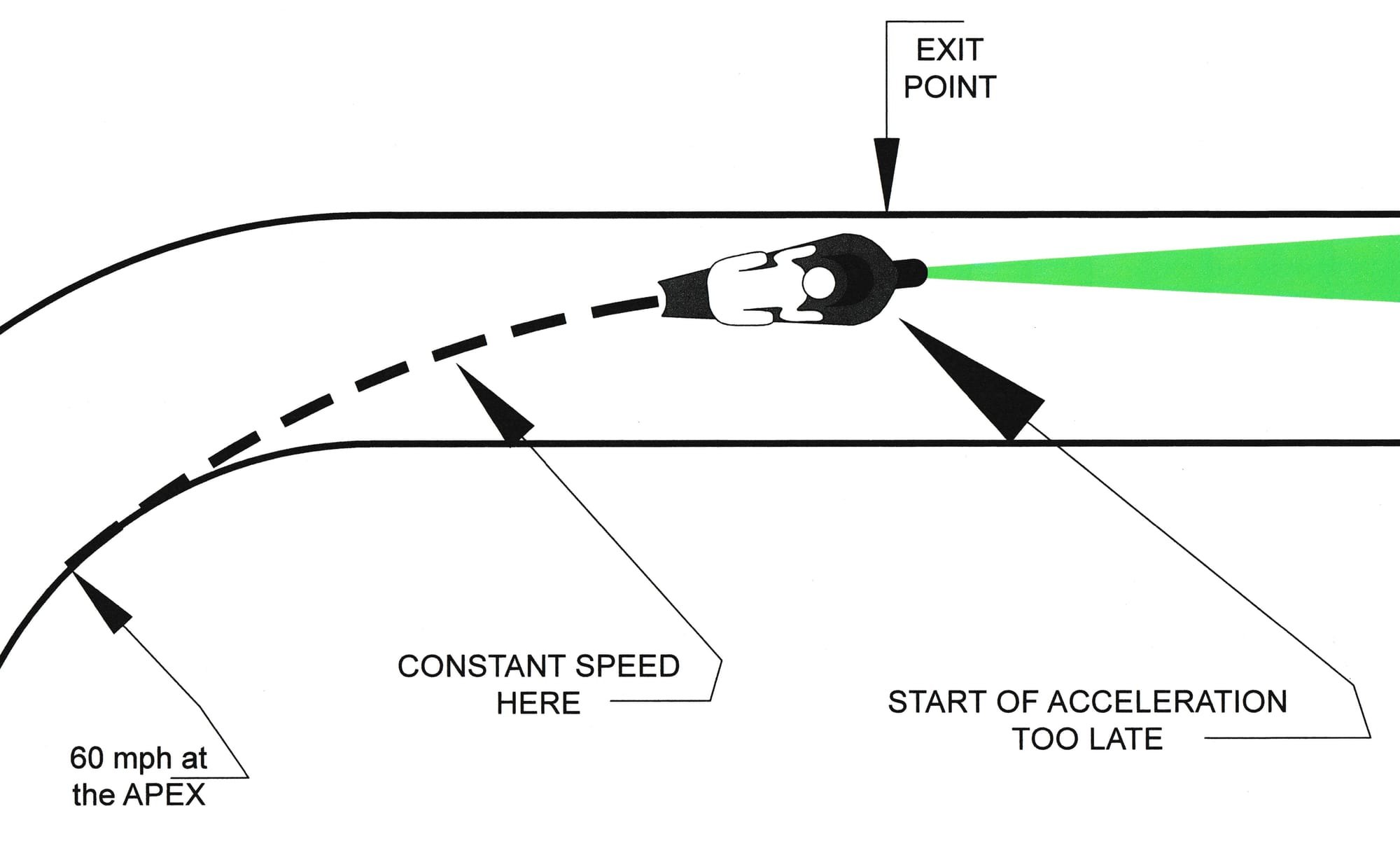 As shown here, if the racer doesn’t start to accelerate until he is on the straight, then his average speed though the entire exit is only 60 mph.  The racer will then be accelerating from only 60 MPH after the turn.  This acceleration from this slower speed will result in a lower terminal velocity at the end of the straight.   It’s fairly obvious that this is not the best way to exit a turn in a racing scenario.

A Better way to Exit

(Figure 4)  This shows an example of an acceptable, generic and most commonly used acceleration curve in the exit of a turn (Green Curve). 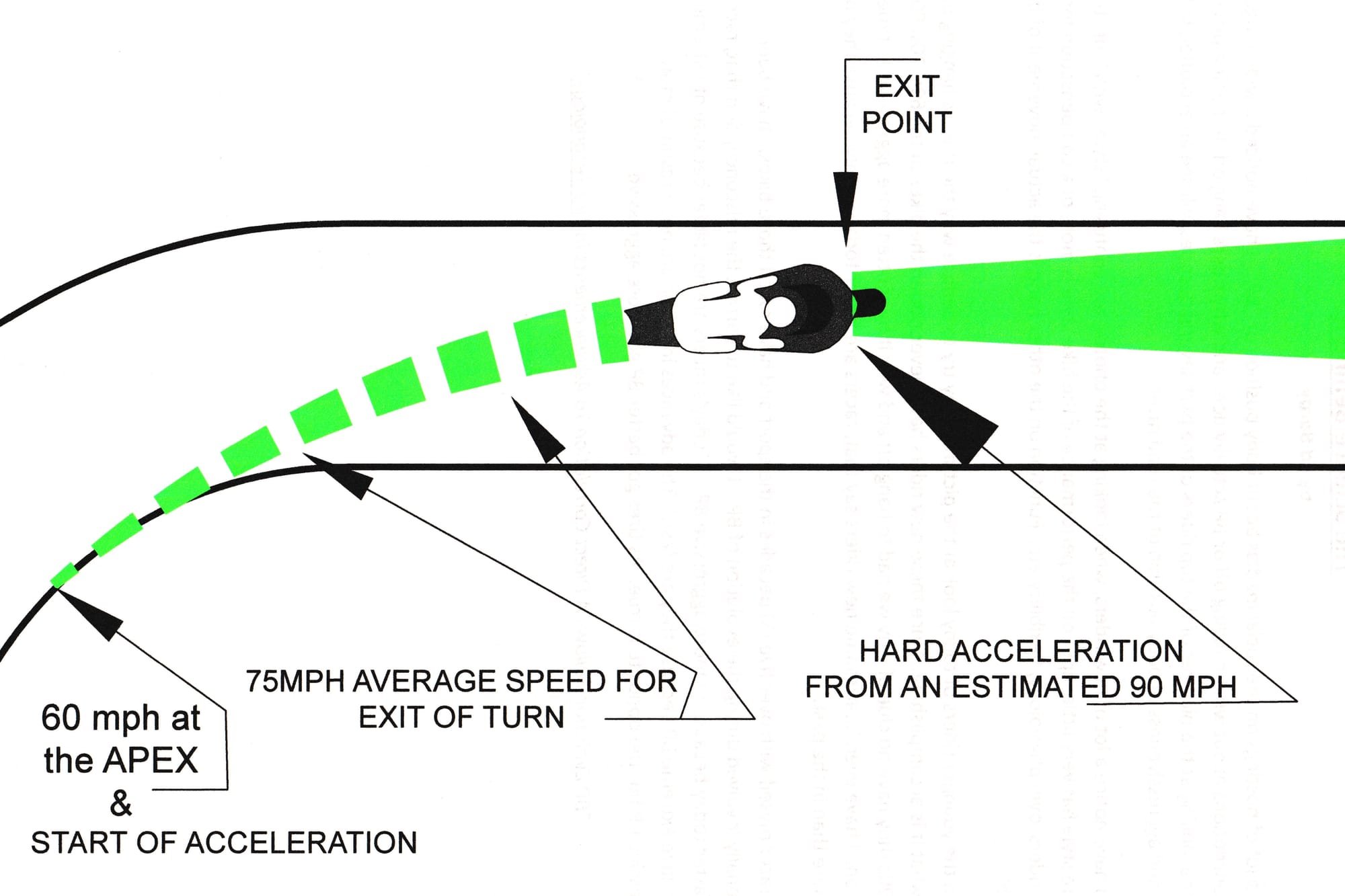 Figure 4 We can see the racer has actually started to roll in some throttle and start to accelerate at the Apex of the turn.  Enough throttle will be smoothly and continually rolled open to accomplish a constant rate of acceleration through most of the exit (Dashed Green Line).  All the way from the apex the racer will be applying a smoothly increasing throttle.  The racer will be obtaining full throttle just at the Exit Point of the turn.

Important note, for the racer to be able to start to roll in some substantial throttle, the tires must have enough traction available.  If all the traction is already used up just by the cornering forces alone, then this concept won’t work.

In these examples, we conservatively use an average sport bike at 60 mph at the Apex which can achieve an estimated speed of about 90 MPH at the exit point.  This relates to an increase in speed of 30 MPH.  With simple math we can see that with an initial speed of 60 MPH at the Apex then a final speed of 90 MPH at the Exit point will result in an average speed of 75 MPH, with the rider attaining full throttle at or just before the Exit point.   The racer can now continue to accelerate from 90 MPH instead of 60 MPH and attain a higher top speed on the straight.

"In Theory"  If you have the same compound tires front and rear and they are both at proper temperature and pressure, then you should have the same amount of traction front & rear.  With equal traction available then, in theory, the “G” load of deceleration mid turn will be at the same potential as the G load of accelerating off the Apex.

Now, to be honest, trying to achieve the same Gs, on deceleration and acceleration, is a tricky game to play.  Very few riders can actually achieve a 100% parity.  If done incorrectly a rider can, quickly and easily, wash out the front wheel.

For new racers, the thought of carrying the brakes into a turn can be a scary notion.  When new riders are  learning to ride, have had it drilled into their heads to never use front brake while leaned over.  That is for a good reason.  Braking while leaned over is tricky.  If done too aggressively or jerky and/or with unsuitable tires, can lead to a front-end washout which is un-recoverable.  However, with good race tires, there is usually a lot of traction to be used up while entering a turn.  A little hint or feedback I use is from the throttle.  I have found that if I have enough traction to apply a substantial acceleration while leaned over in the exit of the turn then, I should have enough traction for substantial braking while leaned over in the entrance.  Remember in order to be fast, you must use all of the traction.

The Process of Trail Braking

As with all the other techniques, we make small incremental changes.  The same holds true here.  The object of trail braking is just to get down to you desired "Mid Corner" speed just before the apex.  Word of caution; do not try to brake all the way to the apex on the very first lap.

As mentioned above, if you are already down to your desired cornering speed when you get to your turning point then any trail braking will be counterproductive.

The next two diagrams show this in more detail.

(Figure 5) As shown here, the rider is at his desired entry speed at the turning point and releases the brake.

Figure 5 (Figure 6) Now, using the same braking point and the rider, trying to use trail braking, carries his braking past the turning point he will actually slow down too much.   Even after the brakes are released the bike will continue to slow down more.  By the time the rider gets to the apex he could be as much as 15-20 mph too slow.

(Figure 7)  Start this process of learning effective trail braking into the turn very conservatively.  First, Delay your initial braking point just a few feet, as shown.  This will give you a couple of extra MPH at the turning point.  Then, as you start to lean the bike over, smoothly reduce the brake pressure enough to keep the front tire from washing out. Carry your front brake a short distance into the turn, while maintaining constant but reduced pressure, until you are down to your desired cornering speed.  Then smoothly release the brake.  The result is the additional throttle time shown here.

Figure 7Notice your new release point.  If you have released your brake well before the apex, you might be able to carry a little more speed into the turn in future laps.  Which means you could start your braking a little later and stay on the gas a few feet more.

The process can be repeated until all of the coasting has been converted to additional throttle time on the straight.   As with every other technique,  you must make small Incremental changes.

(Figure 8) This shows a schematic of relative changes brake pressure application to attain the final goal of trail braking, when it is taken to its fullest potential.   Contrary to popular opinion the trail braking pressure is not a continuous reduction of brake pressure from turning point to the final release point.  To keep your rate of deceleration  constant you will need a constant steady pressure on the lever but, reduced from what you can apply while straight line braking. 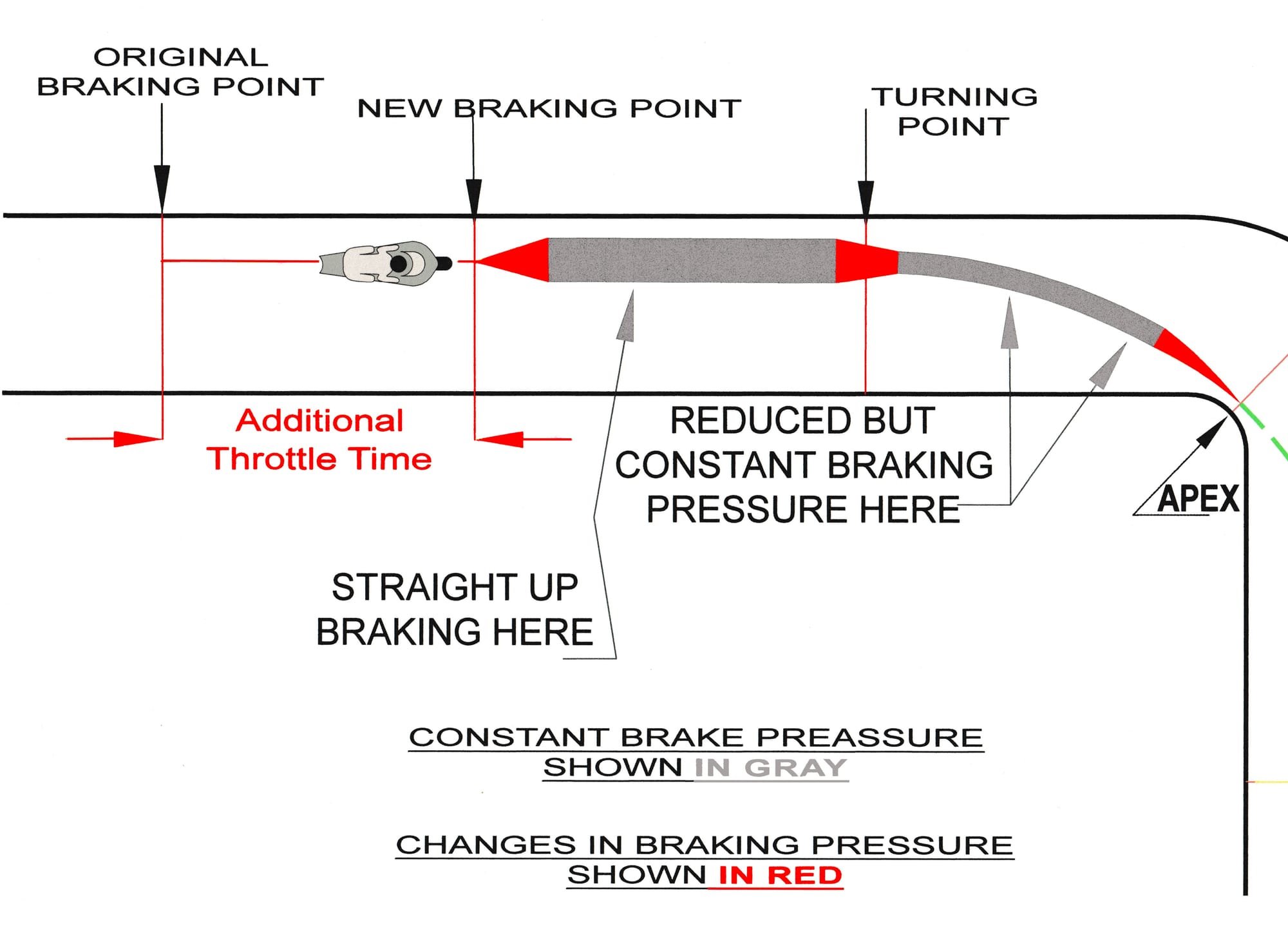 Figure 8 (Figure 9) In this sequence you can see the series of steps taken;

2.    A constant braking pressure is maintained until the turn is started

3.    The pressure smoothly is reduced as the bike is leaned over

4.    A constant but, reduced brake pressure is maintained to develop a constant rate of deceleration

5.    The brake is smoothly released when the bike is down to the desired mid corner speed

braking (RED) and accelerating (GREEN).  The width of the lines represents the relative changes in the speed of the bike through the turn.

The trick is to use all of the traction but not cross that very fine line between control and a face plant.  As with everything else, there is a mental tool or feedback the rider can use to check his traction level.  Now, this is a subtle feedback and it varies from bike to bike and tire to tire but, it is there, IF you are smooth and flowing in your techniques.  This feedback will come through the handlebars.  This feedback is manifested in the “Braking Stand Up” phenomenon.  This will be addressed in another article. ”Braking Stand Up and How to Use It”