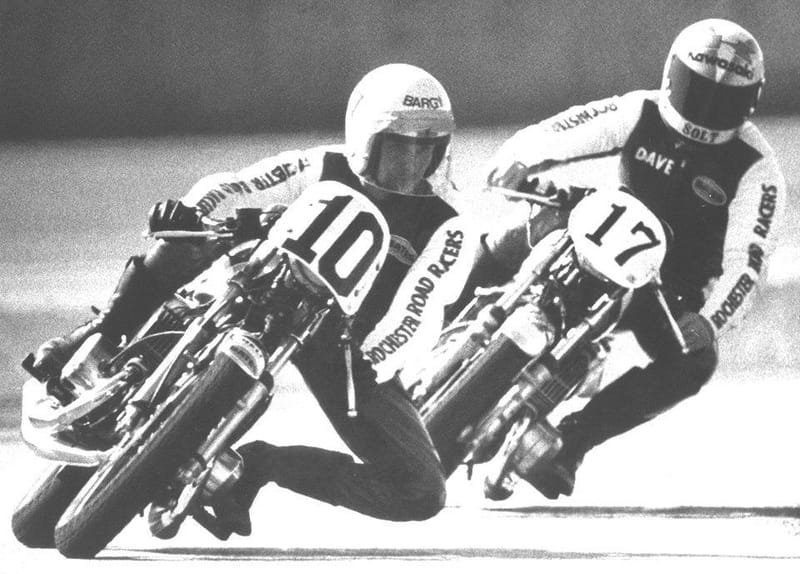 I see a lot of postings on the social medias about body position or "BP". I have noticed a wide range of misconceptions about what hanging off or BP actually does and why riders hang off in the first place. Anyone looking at the pictures of the top riders of the past several decades will see an evolution in the style and aggressiveness of body position of the road racer. Also, I have noticed a lot of new riders, when looking at the photos, are confusing "style" with "function".

Where style has very little input on the performance of the bike, style is more of a compensation for each riders' own physiology, flexibility etc. Function on the other hand is the actual movement of body weight to accomplish a specific goal. When the younger riders of today look at the pictures, they try to deduce why the rider is hanging off and what it is accomplishing. Since these new riders have never ridden the bikes of the 60s, 70s, 80s and 90s they have no clue of why we had to hang off and why it has gotten more aggressive as time goes on. I have even heard some new riders say that racers are faster today mainly because they hang off more than in the past.

As a racer myself with over five (5) decades in the sport and have raced those bikes, I have been personally involved during the evolution of BP. I would like to correct the misconception that, racers are faster today because of more aggressive BP. "Today's racers are not faster because of extreme BP. "They have extreme BP because they are faster." The advances in racing are not a result of more aggressive BP but the opposite is true. As tires got better, BP got more aggressive "BP Evolution has a Direct Correlation to Advancements in Tire Technology". In the big picture, the advances road racing has always been a battle between traction and ground clearance. 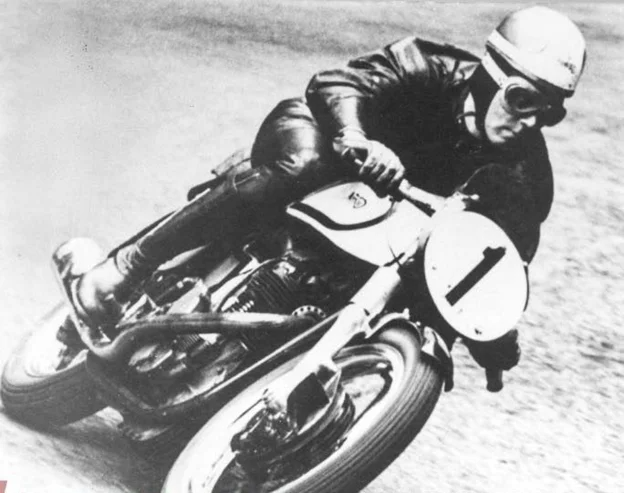 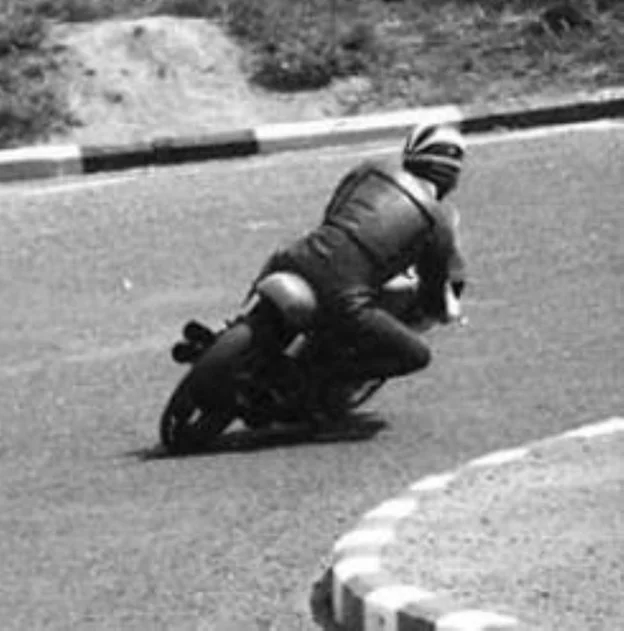 If we now move into the 60s there was a small improvement in tire design. The increase in traction allowed some riders on certain bikes to just barely run out of ground clearance at the same instant they used up all the traction. We will see a slight change in the BP. Riders started to throw out their inside knee a little. This knee out would cause the bike to straighten up just enough to keep the exhaust pipes from dragging. I personally went through this with my 1959 BSA Super Rocket in England. When I would be dragging my pipes, I found by moving a small amount of my weight to the inside, I would now gain enough ground clearance to go a little faster and use up the extra traction from the better tire. After that I noticed, when I would start to slide the tire, any more aggressive BP had no further beneficial effect.

In the early 70s there wasn't much improvement in the grip of the motorcycle racing tire from the mid-60s. On the other hand, there was a drastic reduction in the ground clearance with the introduction of "Box Stock, Production" classes with the multi-cylinder two stroke motors such as the Kaw triples and Suzuki's and then the four-cylinder Hondas.

These bikes had more and fatter pipes hanging off the bottom. These classes also required us to run DOT tires not racing slicks. The reduction in ground clearance made it was quite common to drag hard parts long before we ran out of traction, even with non-racing tires. In order to go faster we realized we needed to stand the bike up a little more than in the mid to late 60s.

We found that by hanging more of our body off to the inside we would gain extra ground clearance, now we could go faster and use up the extra clearance. At the same time, we noticed that the narrower production bikes like the 2-cylinder Yamahas had more clearance and didn't drag their pipes as soon. The result was that the Yamahas could corner just a little faster without hanging off, before dragging their pipes. 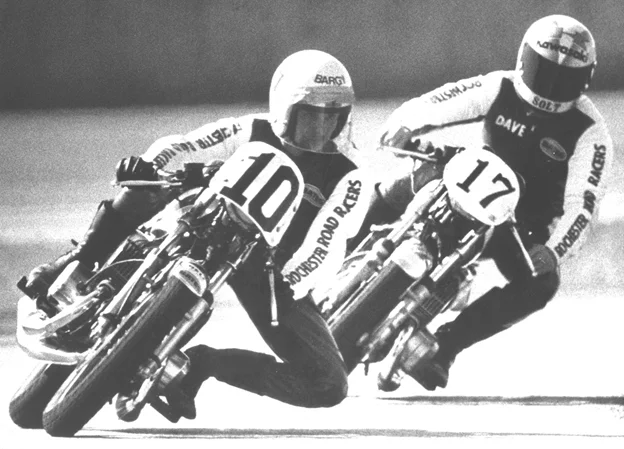 This is when we started to experiment with different BPs. (When I say "we" I'm referring to myself and one or two of my teammates at the time. I can't vouch for what other racers or teams were doing at that time) We wanted to find out which BP would result in the best gain in ground clearance. We could put the bike into a turn fast enough and leaned over just enough for the pipes to be just barley scraping. While maintaining a constant speed and radius, we moved into a different posture.

As we changed position, we would quickly notice if the pipes would drag harder or if we gain clearance. We found ourselves trying basically two different postures. One position was to keep our butt on the seat and move our head and shoulders into the turn. This was a common posture of the new racers at the time, but as racers got more experienced, it was quickly dropped. The other was to keep our head centered and slide our butt and leg off to the inside. Repeatedly, the results showed that the head and shoulder position had a lot less effect on clearance than sliding the butt off the seat. We also found we preferred the butt off BP because, it kept our hands and arms in a comfortable riding position and afforded us the most precise control of the bike, where the head & should position compromised our feel and control of the bike. 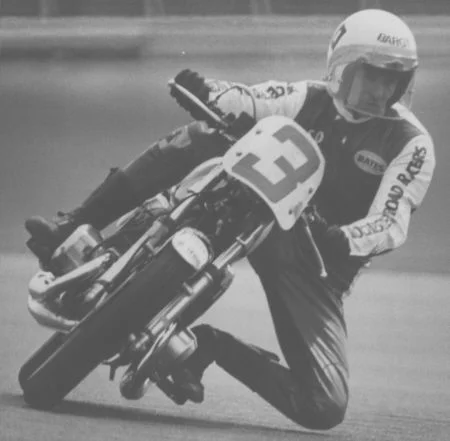 After we got comfortable cornering while hanging off, we tried slight changes in PB. Once again, we would put the bike into a turn with the pipes just barely scraping. We would then try changing our position, one is sitting up with our heads up, as shown here, the other was to maintain our butt off posture but, go into a tuck with our head down, simular to the current "Kiss the Mirror BP, (no photo available). The result was, when we had the pipes scraping while our head was up then bent down into the tuck head down position (kiss the Mirror) the dragging of the pipe actually got worse.

If we stated with our head down and just scraping then sat up, the scrapping would stop. We concluded that head up gave use the best clearance. We also concluded it was how far "off center" to the right or left you moved your weigh which had the biggest impact on the lean angle of the bike. Moving our weight up or down had the least, if any, impact on lean angle. Head up or head down is more a matter of "Style" than "Functionality".

As production class racers we had to develop our PB several years before what we call the "GP" riders had to. The GP riders were riding the factory-built road race bikes such as the Yamaha TD, TA or the TZ series. These bikes had lot more ground clearance to start with. They also had the current "Racing tires" with a whole lot more traction than the DOTs we were riding. The better clearance allowed them to lean a lot more before scraping hard parts. 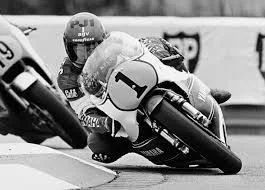 As mentioned above, once the traction was used up any further increase in BP was an exercise in futility and a waste of time and effort. 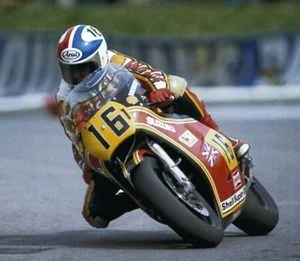 By the time we get into the late 80's and early 90's tires had gone through a major improvement. The racing tires were now developing estimated 1.4 - 1.5+ Coefficient of Friction (CF) or better, compared to 1.0-1.2 CF of the previous years. With the improved tires the riders were once again going fast enough to run out of clearance before traction. The result was the BP had to get more aggressive to get the hard parts off the ground to go faster and use up the extra traction. As you can see there isn't much difference between what we were doing in the 70's compared to what the GP boys were doing in the 90's. Just they were leaned over more because of better tires. Tires, bike chassis, clearance and BP kept evolving together over the past couple of decades. 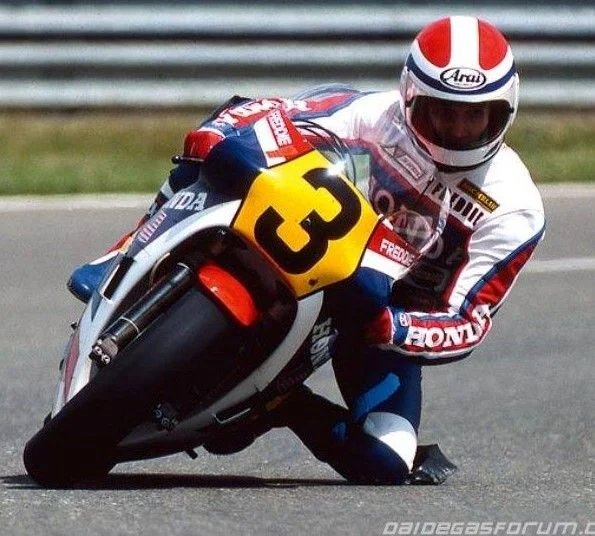 Current race bikes can go markedly faster. Mainly because of better tire with an estimated Cf of 1.7 - 2.0. Looking at a top world class rider of this generation you will see and extremely aggressive BP. In this photo below notice his lean angle. You can easily see that he has used up all of his clearance. If he weren’t hanging off as much, as he is, he would be dragging all sorts of hard parts and not be able to go as fast or even crash. He has to be aggressive in his BP. 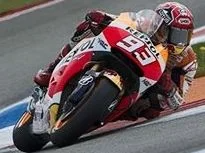