A misconception about a cornering motorcycle is the term “Centrifugal Force”. In the science and engineering world, the term centrifugal force is not used, it is referred to a simply straight-line inertia. There are, however, “Centripetal Forces”. These are the forces opposing the inertia force and cause a body in motion to follow a curved path.

For example, the infamous spinning ball on a string, a Centripetal Force pulling inward is generated by the string. The inertia keeps pulling outward on the ball. If the string broke, the ball would react to the inertia and fly off in a straight line. 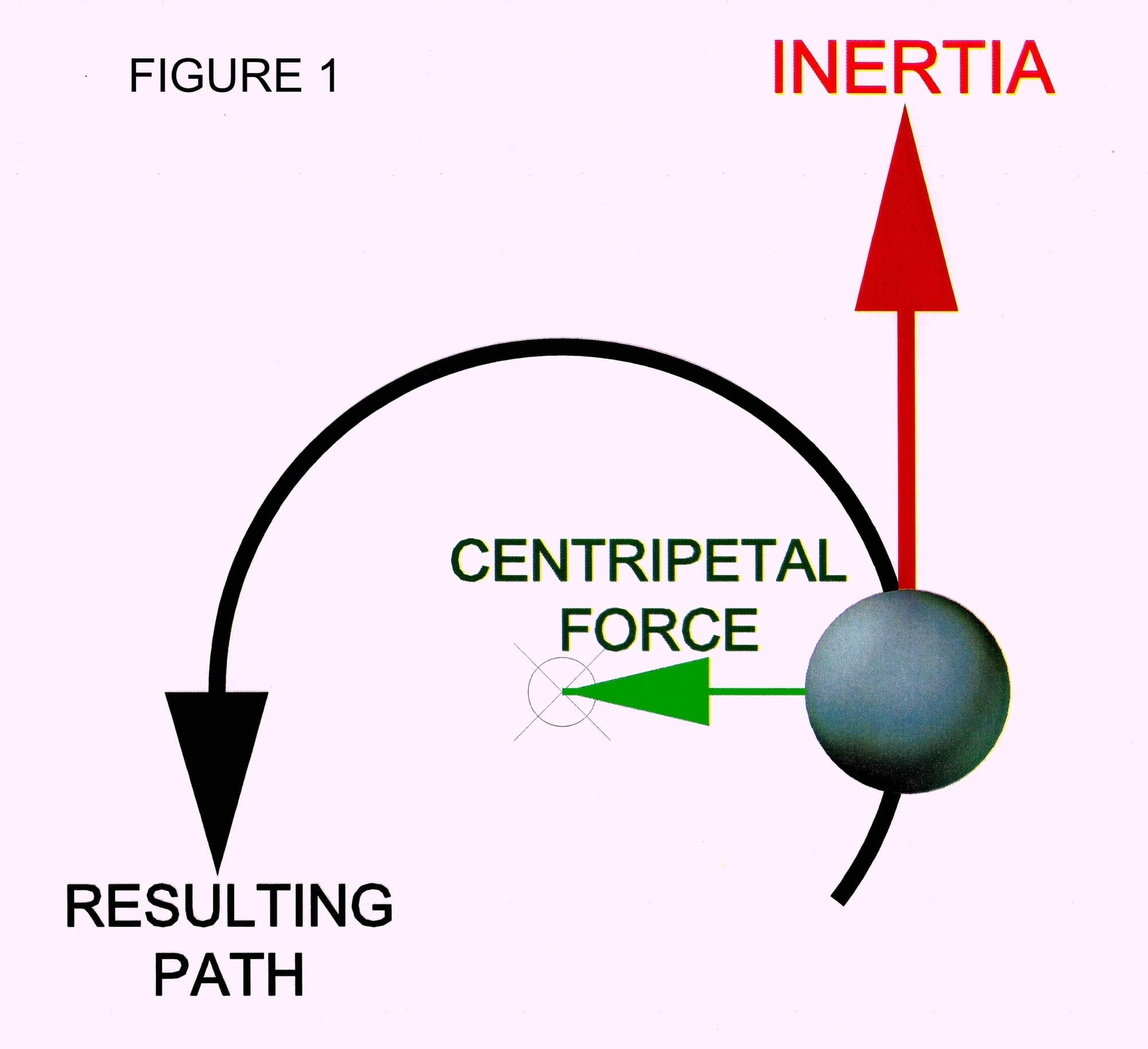 For this writing we will use either inertia or cornering forces interchangeably as forces acting on the tire and chassis.

Inertia and A Cornering Motorcycle

If you have a single force acting on an object, the object will tend to move in a straight line in the same direction of the applied force. Whereas, if you have two forces, from two different directions, object will tend to move at an angle, relative to the combined two forces. This is called a “Force Vector”. The same holds true for motorcycle motion.

When a motorcycle is traveling in a straight path there tends to be only one force acting on the chassis, that is Gravity. Gravity is always a straight vertical force of 1g. Shown here as a red arrow. 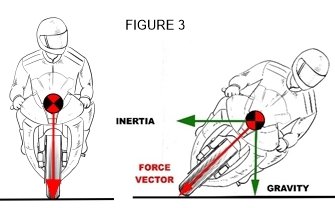 When a motorcycle is cornering, there are two main forces acting on the bike, Gravity, and Inertia. These two forces combine and create a Force Vector. The angle of the Force Vector is, strictly a function of the speed and radius of the turn. For example, if the motorcycle is in a 400ft radius turn and traveling at 75mph then, the Vector Angle will always be 45°. If the motorcycle is traveling a 100mph on a 400ft radius turn, it would have a Vector Angle will be 60°.

Why & When to Use BP

We will use the current term, Body Position (BP). BP is a valuable tool that all good motorcycle road racers, and to some level, track day riders, need to use when needed. The key words to notice are "When Needed". There are many different styles, but they all try to accomplish the same result. There are many misconceptions and a lot of hyperbole about the effects of BP. In this chapter, when we refer to BP, we are talking about moving our weight either to the right or to the left of the centerline of the motorcycle. Moving weight forward or rearward is a different discussion.

All motorcycles have what I refer to as "The Mechanical Limit of Lean Angle".

1. Ground clearance of the chassis and/or

2. The edge of the tire tread.

The first and most obvious limit to lean angle is Ground Clearance. Ground clearance is the mechanical limit as to how far can you lean before parts of the motorcycle chassis physically start to drag on the ground. With today’s sport bikes, the first thing to drag is usually the lower fairing. In years past the exhaust pipes, mufflers and or the foot pegs were the first to drag on the ground. The ground clearance back then was so limited that we would drag parts of the bike long before we used up all the traction. Even at that, aggressively dragging of the hard parts of the motorcycle will reduce the total weight on the tire contact patch. Less weight on the contact patch will reduce the available traction and allow the tire to slide. A lot of effort went into trying to improve our ground clearance, back then, by moving pipes and foot pegs etc. This is when the art of hanging off the bike started to develop. Eventually we got enough ground clearance to run out of traction.

Some bikes have tremendous amount of ground clearance and can lean over far enough, for the racer to be on the Edge or Shoulder of the tread. This is where the tread and sidewall meet. The problem here is the size of the contact patch is radically reduced in cross-section area. Now the racer has a lot less surface area trying to control the same amount of force and weight.

This will cause the mechanical stresses, high shearing forces and elevated surface temperature of the rubber, etc. This small contact patch can start to tear and/or shred. This is often referred to as cold tear. This significant reduction in contact patch size could even cause the rubber to overheat and soften too much and start to tear or melt. The contact patch will also start to strain and deform under of the increased stress. This deformation can cause the bike to feel unstable. It is not uncommon for a tire in this situation, with no warning, to suddenly and completely, break loose, causing the racer an exciting moment or two.

The result of exceeding either of the limits of lean, the tire will ultimately start to slide.

What Does BP Actually Accomplish?

Let's start with an explanation of the Centers of Gravity CG, as it applies to a moving motorcycle.

It is common knowledge that, the motorcycle has a CG shown in Red Dot (A). The racers body has its own CG Green Dot (B). These two will remain unchanged. (A) When the racer is sitting straight up in a standard riding position, and the bike is going straight, the RCG is centered on the bike (left to right). If the bike is traveling in a straight line, the resulting RCG will always remain directly over the tire contact area. Notice, all three CGs are in perfect alignment. The RCG will always be located on a straight line between the Bike’s CG and the racer’s CG. (B) The following is probably the most misunderstood dynamic of a balanced motorcycle and how CGs work.

If the racer moves some of his weight off to one side of the bike, while keeping the bike traveling in a straight line, the resulting RCG will still remain directly over the tire contact area. But, as you can see, the bike is no longer be straight up, it will lean away from the racer. For every pound of body weight, the racer moves to one side, an equal amount of motorcycle weight must move to the other side. If the motorcycle is traveling in a straight line, the resulting RCG will always be directly vertical above the tire contact patch no matter what the BP the racer uses.

This can also be looked at as Newton’s law of motion, “Action - Reaction”. As the rider’s  moves to the right, “Action”, the “Reaction” is the bike moves left. 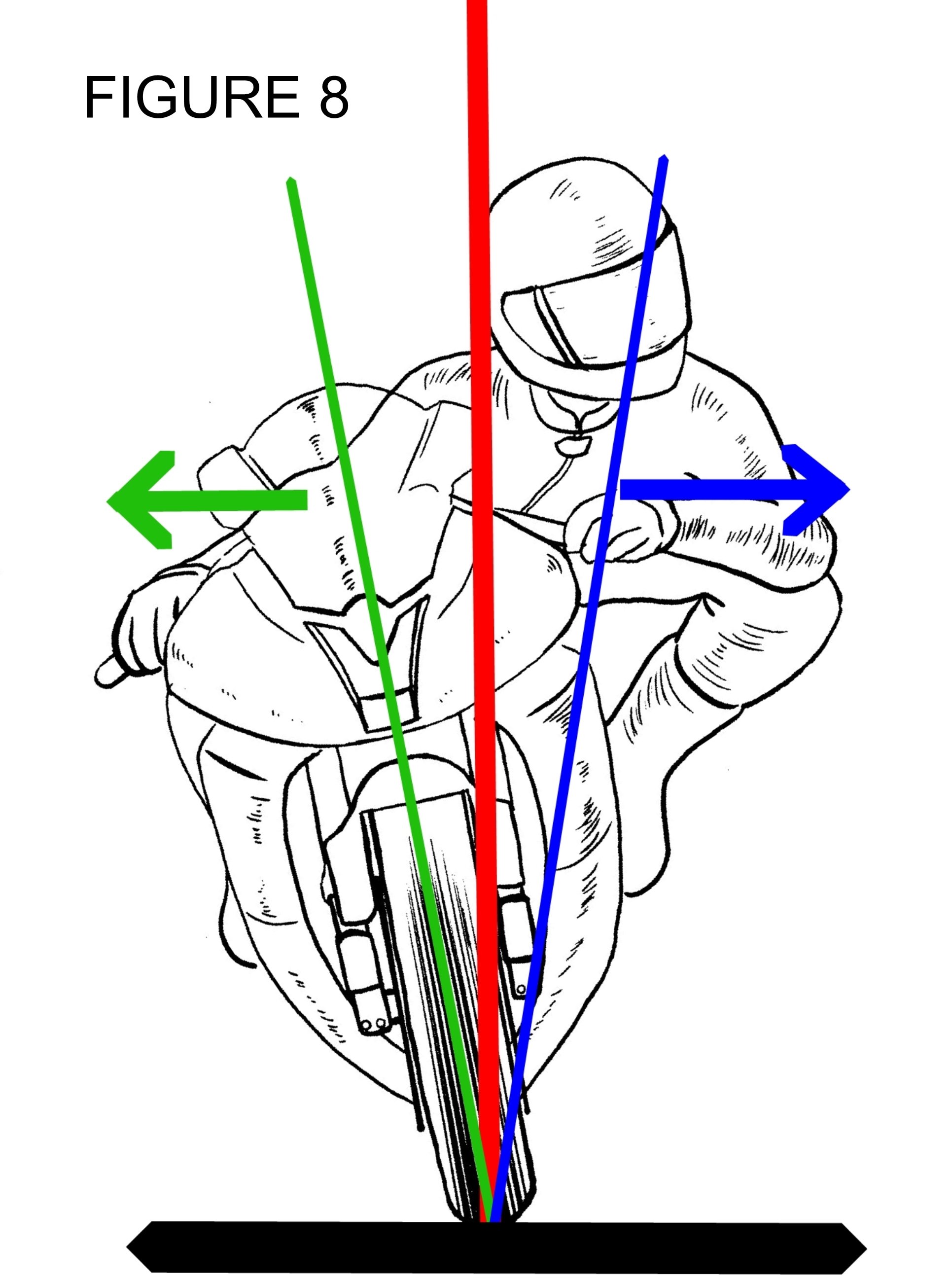 In identical radius & speed turns, a line drawn through the Resulting CG to the contact area will always form the same angle or Force Vector relative to horizon, regardless of BP.

In these three examples, all the bikes are traveling at the exact same speed and exact same radius turn.

A. The racer is in the “Standard” riding position. The Force Vector is at a 45° angle. Notice the center line chassis of the bike and forced vector are at the same angle.

B. Shows a racer on an older style bike and in the “Conventional BP”. This force vector, Orange Arrow,  is also at a 45° angle. But notice the center line of the chassis, Red Dashed Line, is straightened up to 39°.

C. Shows a racer in the new “Moto GP style BP. Notice, that his force vector is also at a 45° angle. But the chassis has the smallest lean angle of 38°.

When the racer moves some of his weight, to the inside of the turn, the only thing that will change is the bike’s angle relative to vertical. The more weight the racer moves off center, the more upright the bike will be in the corner. Here’s the important point to notice, the angle of the Force Vector is unchanged by changes in BP. Notice, the force vector is the combined force transferred to the tire contact patch. The BP does not change the force vector or the load the tire feels. The force vector angle is a result of speed and radius only.

One point I would like to make here is, the Conventional BP vs the Moto GP style. The motorcycle will only respond to how much weight is moved off center and how far it is moved off center. The bike doesn’t care if the weight is, the racer’s head, his head and shoulders, Mid-section, butt, knee, and elbow, chest pointed into the turn, chest pointed straight ahead, head up or head down or if he is hanging a bowling ball off to the side.

“The Bike Only Knows, How Much Weight and How Far the Weight, is Moved Off Center.”

Both, the Conventional and the Moto GP styles, accomplish the same goal of moving weight.