Dynamics of rear wheel stepping out from spinning

I’ve been watching several videos on YouTube. One topic that was shown, was the intentional and controlled spinning of the rear wheel while cornering, which is pretty cool to watch. But I have noticed some discrepancies in the details that some of the producers were saying about the dynamics of lean angle and traction involved during tire spin. 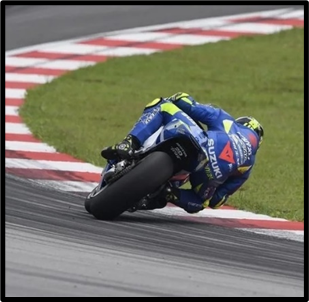 They were saying that because of the addition throttle all the rear traction can be used up. Well, yes, that is why it is spinning in the first place. Then they go on to state that, the rider will need to reduce the lean angle to get some traction back. This is where most confusion, about traction, comes into play.

Now yes, there is somewhat of a correlation between lean angle and traction used. It is true that, the faster you corner the more you need to lean the bike. But it is actually just a “rule of thumb” not a hard, cold, precise, measurement of traction used or available. There are other factors involved to determine how much traction is used.

It is not the lean angle that uses up the traction.

Rule # 1 for traction while cornering, “It is the combined cornering and/or throttle and/or braking forces, that uses up the traction.” The lean angle is the result of cornering forces. Lean angle is a “result” it is not a “cause.”

Spinning the rear tire in motorcycle racing is nothing new. It has been done in oval dirt bike racing such as short track, ½ mile, 1 mile, speedway, for almost a century now. The dynamics of this has been understood for decades. Spinning the rear while cornering on pavement has the same dynamics as on a  dirt oval. It is just the numbers are higher on pavement.

Dynamics of spinning the rear tire while cornering

Observers will notice that when the rear wheel is hung, out by spinning, the bike will generally straighten up, somewhat, either on its own or by rider inputs. It is also, often the case, especially in dirt racing, that the further the rear is hung out the straighter up the bike can be.

The fact is, if the spinning is under control, the bike needs to be straightened up, a little, as it steps out. Because if the rider maintained the original lean angle while the back is stepped out, the bike would actually turn sharper and tighten up its line. The rider needs to straighten up, to maintain a constant turn radius. Next we will look at the  dynamics of this phenomenon.

How does Hanging the rear tire out change the turn radius?

This is the dynamic many pavement track racers don’t fully understand. Lets look at several simple diagrams to visualize the forces acting a bike while cornering normally and when “hanging it out”

This first diagram (A) shows three forces acting a bike mid corner. They are color coded for clarity. 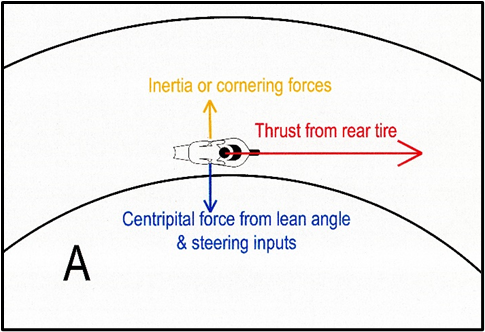 The thrust from the rear tire will always be straight down the center line of the bike chassis. This tends to make the bike go where it is pointed. When all the forces are in a balanced and stable state, the bike will maintain a controlled and stable lean angle & turn radius.

Diagram (B) shows the resulting force vector (Green Arrow) generated by the combination of all three forces acting on the bike. This shows where the bike wants to go. As long as all the forces remain unchanged the bike will continue to turn. 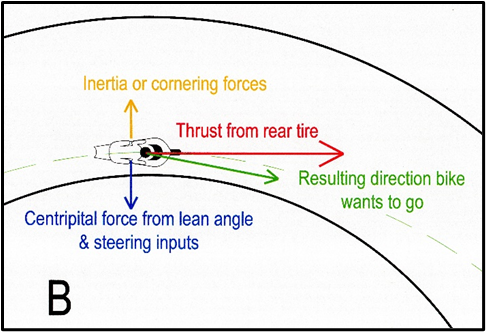 If any of the forces change then the resulting force vector (Green Arrow) will change, and the bike will change its radius.  For example, if the rider adds a little more throttle but, keeps everything else the same, the bike will tend to run wider. The opposite would be true if he reduces the throttle a little, the line will tighten up. Changing lean angle would have the same effect. If the rider leaned a little more, the line would tighten up and if he straightened it up a little, the line would go wider.

Diagram (C) shows the forces when rear wheel starts a controlled spin. Important note; this is not to be confused with the back hanging out from rear wheel braking, Often called "Backing It In". That is a whole different technique. 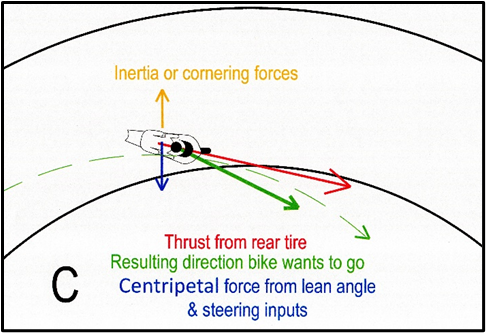 With all the other forces remaining the same and the only input changed is the spinning of the rear tire, notice the rear of the bike steps out. Also, notice the direction the thrust of the rear tire is now pointed. It is pointed into the turn. This will now add a component of force to the centripetal force. With more centripetal force applied, the bike will tend to turn tighter. If the force is high enough, and no corrective action is taken, the bike could actually run off the inside of the turn. In this situation the rider needs to reduce the combined centripetal force to stay on the proper line.

Diagram (D) This shows the result of reducing the lean angle to adjust the centripetal force (Blue Arrow). Once again the only change is the lean angle. All other inputs remain the same. With the reduced centripetal force, the resulting force vector (Green Arrow) now points down track and not to the inside of the turn. The bike and rider will now stay on the pavement. 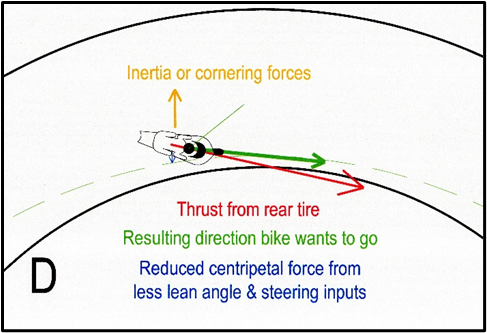 The lean angle of the bike during the spinning of the rear wheel will help to control where the bike goes. The lean angle isn’t changed to try to increase or decrease the traction of the tire.